I, Shahriar and Tanjeem went upto a little over twelve thousand feet (trail camp) of Mount Whitney this 9th July Friday. Despite failing in our attempt to summit, we learnt a lot about mountains and mountaineering in general during this day hike. I loved it!
Shahriar processed all the paper works as team lead in early February this year to apply for 4 passes but finally we 3 friends went there. We picked up the passes one day before the hike from Lone Pine city and went for a practice hike that day. We hiked upto 9800 feet at Lone Pine lake in about 2 hours 20 minutes. This was the last point until which we could have gone without a hiking permit (remember that our hike permit was for next day). This practice helped us making an assessment on where we were physically and team-wise in terms of preparation for the summit. Unfortunately we found that we were under-prepared for this big hike and were not in best of our shape. For example, Tanjeem had a broken sleep cycle last few days due to his office works and some practice hikes very early in the morning. Shahriar although participated in several soccer matches along with the regular weekend soccer, he did as less practice hikes as the other two of us. I, on the contrary, was the least prepared as I found I haven’t even brought the extra food (cake, cookies) and clothes. Shahriar and Tanjeem had extra energy bars, cookies but those don’t go well with me in terms of taste. But still I was full of hope (false hope !?) that we would be able to make it the next day till the peak.
Tanjeem is working in Sillicon Valley as a Hardware Design Engineer. He is another of my friends who are from 1994 HSC batch. He was earlier in Mirzapur Cadet College and Kharagpur IIT. He is consistent in pace in our local hikes from Bay Area Bangladeshi Hikers Group, plays soccer and has done a double trip of Mission Peak hike in 7 hours with Shahriar a few weeks earlier.
Shahriar is working in Cadence as Senior Member of Technical Staff and is the most fit amongst us for physical activities. He plays soccer every weekend and looks for opportunities to stay active. He was also with me in our last year’s hike of Half Dome of Yosemite. He reads about mountaineering, visits REI regularly and follows sites like RMI to stay up-to-date with good hiking and climbing gears as well as latest mountaineering events around the world. This helps me a lot as I often can’t make time to go through this and hence just check what he is with now, and if I like I make a shortcut of picking the same gears.
I am a software engineer by profession and relatively a new hiker by passion since last year . I  was never into physical activities in my life. I have a very weird food habit and timetable that makes me think that I am not the right person for physical activities anyway. However, I have a few advantages like I can stay without food and water for a long period of time. I don’t sweat easily and can ignore pains so that it doesn’t stop me from my regular works or activities. So those of you who think you have physical limitations that you can't get interested on mountaineering, I have a good news for you – you can become a good mountaineer as long as you can grow the passion for it and you are ready to work out on your body. Please remember the best way to see and feel the nature is not by taking some pictures from Vista Points, it's by loosing yourself inside nature - hiking, backpacking.
Our hotel in Comfort Inn at Lone Pine city was at 4400 feet above sea level. This relatively higher altitude may sometimes cause indiscipline in food habit and sleep cycle if you are from a sea level or flat land place like we are from San Francisco Bay Area (or from the flat Island Bangladesh near the Bay of Bengal of South Asia). We went to bed early that night to get a good sleep before our early morning hike next day. Tanjeem and Shahriar couldn’t sleep due to the tension or altitude and woke up early after the midnight. I, as usual, slept easily without interference for 6 hours. 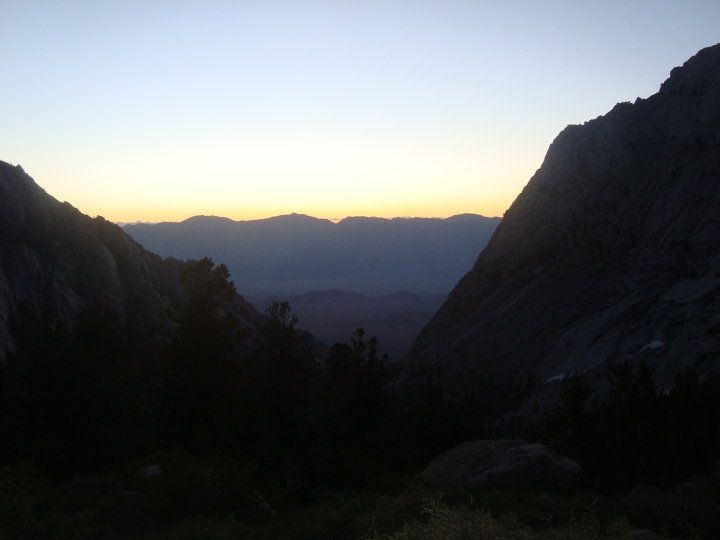 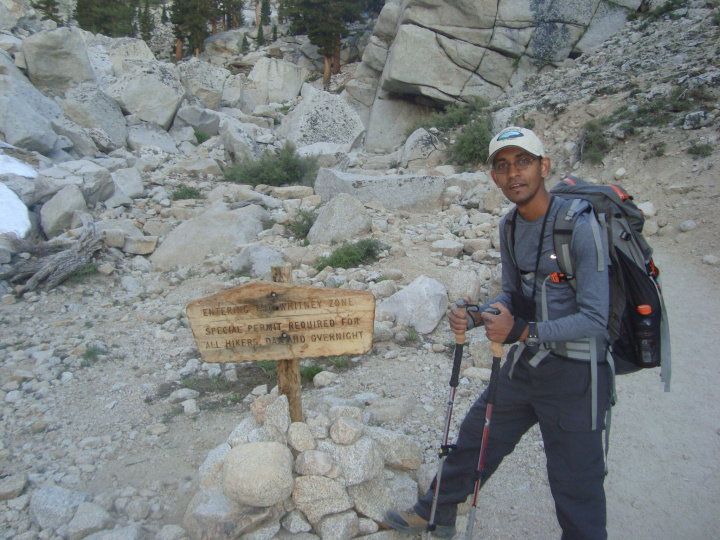 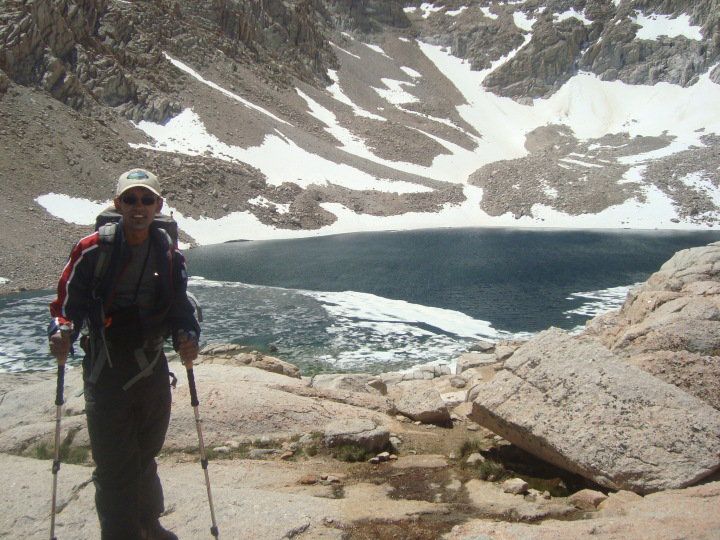 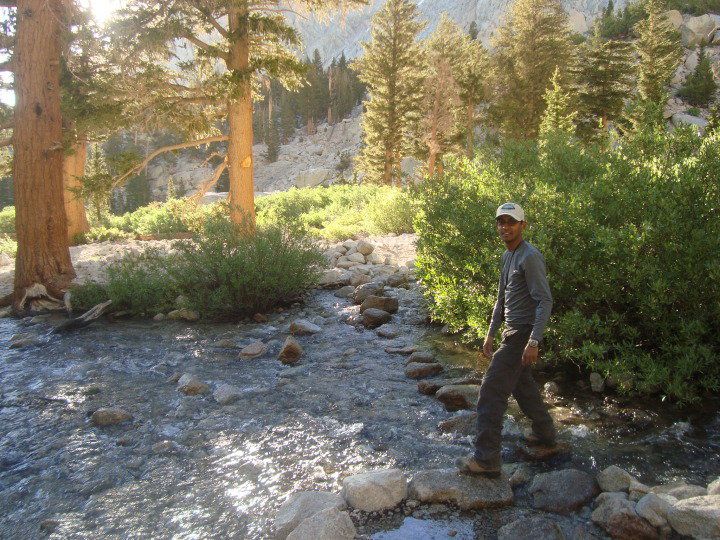 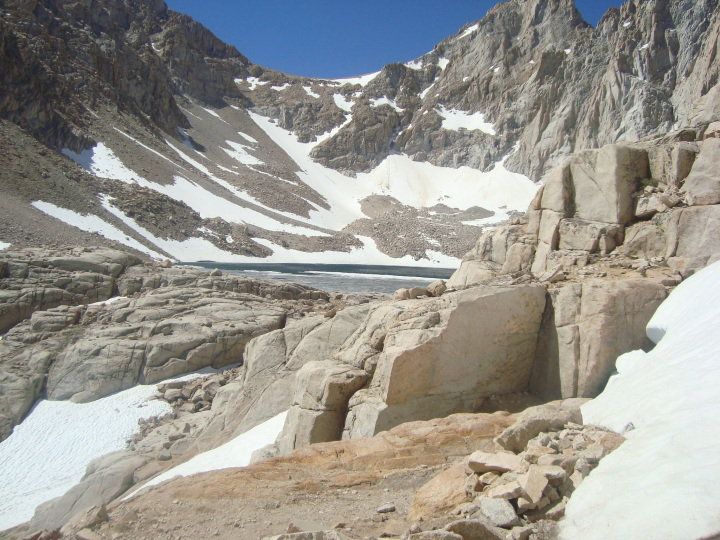 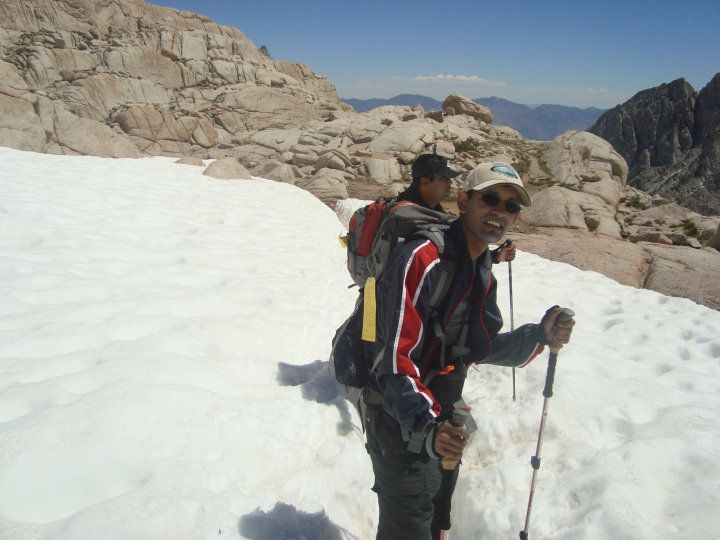 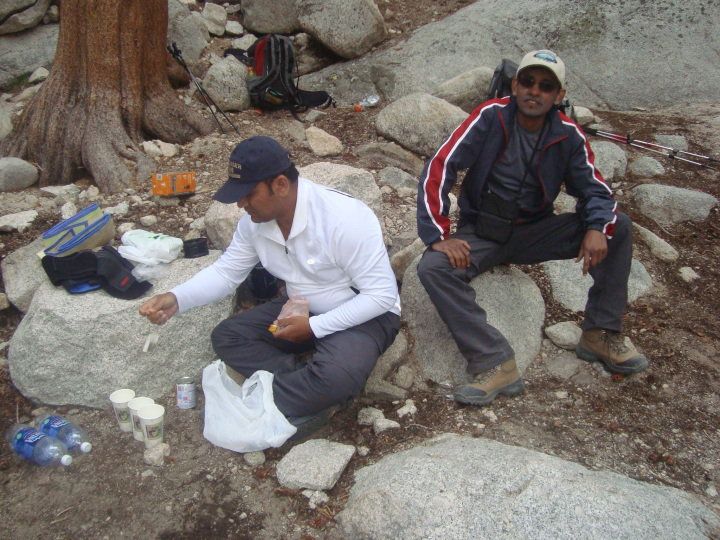 We woke up from bed few minutes after 2 AM, took a little time to get prepared and have breakfast. By the time we started the hike at Whitney trail (8360 feet above sea level) it was 3:45 AM. We took too much weight, mainly water and Gatorade, compared to what we needed. Shahriar took 37 pounds, I took 33 pounds and Tanjeem took 25 pounds weight. Initially, Tanjeem was slower than us, as in the dark trail he felt the constant headache due to high altitude or sleeplessness. But we all thanked the trekking polls that we were using; otherwise we would have slipped often in the trail resulting in injuries. After the sunrise Tanjeem was matching our pace and we thought we started going faster despite some frequent breaks we took. However, we noticed after a while that some other people were crossing us coming from behind. That’s when we realized that we had been going on a too slow pace to reach the peak of Mount Whitney on time. But we still kept pushing ourselves forward. Tanjeem told us that he wanted to go till the Trail camp from where he could have a quick look at the famous 99 switchbacks and return from there. Shahriar and I were still dreaming of reaching the summit that day. Shahriar and Tanjeem were eating energy bars as and when they got tired. But due to my weird food habit, after some Gatorade and breads with nuteela, I stopped eating. This was a serious mistake, as I didn’t get enough food intakes to recharge myself when I was getting tired. Now I believe that it was also a side effect of high altitude – loosing my appetite. So after crossing 12000 feet, I got so tired that I started taking break every few minutes. But by that time Shahriar and I already could calculate our pace and decide that we were giving up for the summit push. A little earlier than that time Tanjeem tried out a steroid food bar as an experiment as he was approaching his physical limit to continue any more. He felt better energy than us after that and went ahead of us till the trail camp at more than 12000 feet above sea level. After crossing 2 snowfields just before the trail camp I told Shahriar that I needed a longer break then, so he could go ahead if he wanted. He was also exhausted but was regaining energy as and when eating snickers, energy bars for calorie intakes. But he decided not to go further as anyway we were nowhere near a summit push. I could realize by then that it was not the heavy weight I was carrying but the combination of high altitude with that heavy weight that took my energy and appetite for food. As I was not eating food or energy bars, I was not regaining energy like the other two. This is why mountaineers talk about acclimatization again and again. Tanjeem was anyway returning back and when he heard that we have decided to go back too, we all turned back from the place trail camp after the Consultation lake. During our descend that started at 11:10AM, we sat down near Mirror Lake for lunch break when we even prepared tea. On the way back, Shahriar slipped once and cut his hand. But he was carrying first aid, so he could cover the cut with a band aid and didn’t complain about the pain. Although Tanjeem bumped into the rocks several times, he didn’t fell down. I was careful enough not to fall down or hot the rock. My target was to go back to Whitney Portal with whatever energy I have left in me so that I don’t have to eat the bad tasty energy bars. I was successful as I only drank water and a little nuts that Shusmita gave during the whole descend. We reached back to Whitney portal at 5 AM with 18 pounds weight apiece in the bag. We had a nice evening meal in Whitney Portal store where we socialized with other hikers. I got energized again after the meal as I didn't eat anything last 4/5 hours except drinking water. Shahriar got fever at night but was ok next morning. Tanjeem was tired so told not to call him before 8/9 next morning. I and Tanjeem forgot to bring cameras, so Shahria's camera was the only one. I carried it most of the time in my neck but we made sure all of us are in the pictures.
We learnt what high altitude means and what happens if we are under-prepared for a big challenge and how important teamwork is. We will use this experience for our future expeditions. But I knew very well about my passion for the mountains. My respect for Mount Whitney has increased several times. I am not going to under-estimate any other mountains; especially the day hikes in future. So in all sense, this trip is a story of our success and failure, success for how far we went high within a day and came back safe; and failure because we couldn't make it to the top. I will attempt it again ext year, but this time with proper planning and preparation InshaAllah.


Unfortunately Whitney day hike summit wasn't successful, but it was a great experience for all of us as we gained good knowledge and experience about high altitude hike/climb. This mission will help us in the future missions :). InshAllah I will be back for Whitney mission again on 2011.

Few reasons, that we couldn't summit:
1. Very less practice before the Whitney hike
2. Less team work
3. High altitude that made us tired in very short time
4. Back pack was too heavy, we carried too much water! We should purify water in future as there were sources of water in many places throughout the trail
5. Because of #1-4, we took much time to reach trail camp (around 3 hours) which made the day hike not possible. But if we could have stayed 1 night in the trail (one night camping), we could have reached the summit!

Returned to the Whitney Portal @5.15 PM (6.3 Miles)
Location: Mount Whitney Trail, CA
I will write a separate entry on our Death Valley report the day after this hike shortly.
at July 19, 2010