Measuring Average Differently: Highest Runs Per Innings Discounting Not Out

Happy new year 2011! Last year 2010 was a very important year for me primarily due to the birth of our second daughter Suhaila. The last few days of the year I spent mostly with Ammu and Ahyan shopping for Rasel's engagement and marriage. It's lot of fun. Also I thoroughly enjoyed the India vs South Africa test series during this time. Sreeshant excellent bouncer to make Jack Kallis helpless in the second test turning him into a C shape will remain in my memory as long as I cherish test cricket. 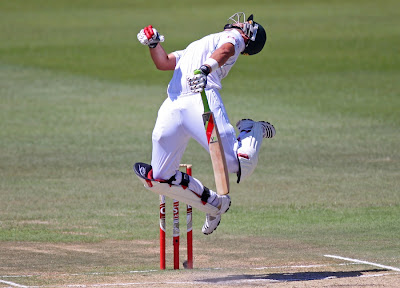 Here is an important number in cricket for batsmen with some modifications from me as a new year gift for the readers - highest batting average. The traditional way of measuring batting average is to divide the total career runs scored by the number of innings he played excluding the not out innings. This way we know before getting out, the batsmen scores how many runs on an average. Forget about the Bradman's magical 99.94, then the good batsmen averages around 50 to 60 runs before getting out once. Amongst our current players, Sangakkara, Tendulkar and Kallis are top in this list. You can get a pick of that list from CricInfo in the following URL - http://stats.espncricinfo.com/ci/content/records/282910.html
A few writers tries to say that the high average of Tendulkar is due to his many not out innings and Lara for his reason is in the lower 50s because of only 6 not out innings in his career (and o boy, 3 of them I call recall are 400*, 375* and famous 153*)! Instead they were saying that if you measure runs per test (no matter if the batsmen could play in both innings or one innings) and discount not outs, then Lara is quite ahead. That is a very unfair comparison because Lara played almost in all Tests in both the innings while Tendulkar didn't get a chance to play in the second innings in many Tests. Instead I believe the measurement below I gave (Runs Per Innings) will give the view they wanted to have, how many runs a batsmen score on an average in each innings played without giving any special tribute for remaining not out in any innings. I have taken a minimum of 5000 test runs scored to filter out bolwers and batsmen I am not interested about. Bradman again obviously comes first with 87.45. Apart from him there are only 10 batsmen who are above 50 with the second placed Jack Hobbs at 53.03.
at January 01, 2011