Shusmita had her surgery by Dr. Shakira yesterday successfully. It was a short out-patient one and I took care of Ahyan the whole day until Shusmita started holding him from evening. Alhamdulillah, everything went fine!
at March 23, 2007 No comments:

This cartoon mimics my state well. 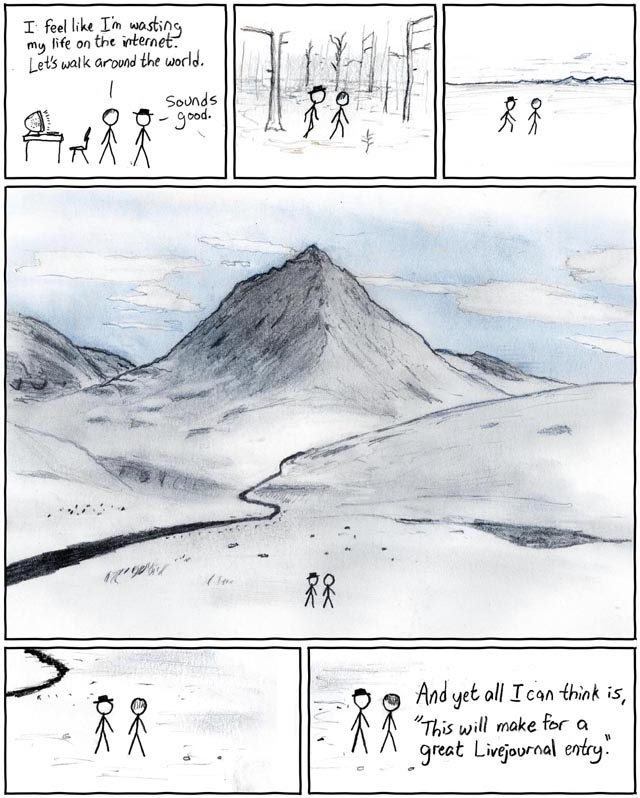 Campaign by NRBs to Help BD

Campaign by NRBs to Help BD

Every dollar you send through unofficial channels, that might helps a corrupt culprit to transfer their wealth.

This article is aimed specifically to all the non-resident Bangladeshis who are working hard to make a fortune in foreign lands. Almost all of us, except for those who are hiding in foreign lands with their illegally earned money, are very happy about what is going on in Bangladesh during the tenure of current government. In addition to reading the free newspapers on the internet and feeling happy, is there anything that you could do to help Bangladesh?

Everybody in Bangladesh is adjusting their lifestyles to match the changed political scenario. NRBs also had to take part in that, though infairly, since the crackdown started on the illegal VoIP businesses. Through this column, we have earlier mentioned that there were alternative ways that the CG could do without harming the NRBs by disconnecting them from their family members. Our guess is that the corrupt within the BTTB, BTRC and law enforcement did not want to take that route. Rather they wanted to show unnecessary stringency without using their brain, so the CG faces a problem.

Anyways, todays article is about two other things that NRBs could do to help their motherland.

1. We beleive that most of the NRBs know that every dollar that you send to Bangladesh through unofficial channels like hundi, that helps the corrupts to transfer their money. However, NRB do not usually think much about this for two reason. One reason is purely financial, since they get a better rate through hundi. Another reason is that they get few dollars of less transaction fee. Corrupts take advantage of this carelessness of NRBs and uses those hundi to transfer their stolen money out of Bangladesh. Given the current crackdown that is going on in Bangladesh, the demand for these hundis must be very high. The NRBs should think again before using an unofficial channel again. Please use official channels to send money home even if that costs you few extra dollars. Also, talk to others so everybody does that. This is the least that we should do to help
the CG and future of Bangladesh. Let us make sure that every hundi businessman goes out of business from this month of March. We can do it if we want to!

2. The NRBs must have noticed many come from Bangladesh in investor category in different countries and they start buying cars, houses using hundreds of thousands of dollars cash! It is not very hard to think where did they get those money staying in Bangladesh. Through social channel if you know somebody who is a sure corrupt, think about how to help the authority to catch them - no matter whether they are legal immigrant or not. At the best, you can write letters to your local law enforcement office, local lawmakers about your suspicion - mention that you are doing it out of your sense of social responsibility. Tell them that it is your hunch from the lifestyle and social interaction, unless you have a definite proof to implicate. You can use your knowledge of the salary of a Bangladeshi government official and raise a question how certain official could earn that much money so they can apply for INVESTOR category immigration? Or how could somebody buy a house or two (and a car) by paying hard cash after having a 10 or 15 years of career in Bangladesh Government Office? If you take initiative in this regard, please do not hesitate to forward copies of those letters to your local Bangladeshi Embassy and the Foreign Ministry in Dhaka (http://www.mofa.gov.bd/).

3. Please do not engage in party politics of Bangladesh in foreign lands. If any of you think you can actually do some good to the country by doing this, we are forced to say that the best thing that could be said about you is naive! We think that it is a shame to have branches of political parties of Bangladesh such as AL, BNP, JAPA, etc. A new recent phenomenon is the remaining independents of NRB are considering to make committees of Nagorik Shokti in foreign lands. We are very disheartened to see this aspect to be copied by the latest promising political party of Yunus. We are also disheartened to see that many of the people that we like are considering to engage into this practice without thinking much. We want to make one thing very clear, if you do not live in Bangladesh physically, do not try to do politics of Bangladesh in cities in Europe, Middle East, North America or other Asian countries. Well, you can do that - but that is if you want to help yourself. But if you think you are helping Bangladesh by doing this - all we can say is this: God bless you with more understanding of politics!!

Now there is a valid question that can be raised. Are we saying the NRBs can not or should not contribute into the politics in any way? Certainly they should do that. NRBs can be politically involved in two ways.

4A. In the domicile countries, they should participate into the local political parties to represent the communities, to build bridges and to serve the country in which they live. We see some elected officials in London, UK and Hamtrammak, Michigan, USA, but this should happen in many other cities around the world.

4B. For Bangladesh, NRBs should form pressure groups, lobbying groups to make meaningful reforms in the politics of Bangladesh. These political groups should not be linked to any political parties directly, rather they should cross party line. Some of the burning issues that these groups may adopt are as follows:

(i) Stop party affiliated politics in all professionally elected bodies, including those of Students, Teachers, Engineers, Doctors, etc. This is not a matter of Banning the politics legally, but to make sure that those bans are followed in practice. NRBs can raise fund and hire lawyers in Dhaka to achieve this goal.

(ii) An important issue could be to empower individual MPs of the parliament of Bangladesh. One immediate issue on this could be to support to those politicians who publicly promise to work towards changing the Article 70 of the constitution where the MPs are prohibited to cross party line while voting for a bill. There may be other ways to empower the individual MPs.

(iii) An important issue could be to make a rule that an MP can not become a minister. The reason behind this issue is the fact that whenever an MP becomes a ministers, he or she becomes a manager for serving the government, rather than representing the his or her people. For the same reason, the parliamentary committees on different matters are not being strengthened. Also, there should be a provision that the first business of the parliament would be to complete the parliamentary committees so the MPs can get to their work right away.

(iv) An important issue could be to strenghthen the office of the president. One way to achieve that is to support the politicians who thinks that the President should be elected by the local government representatives and other national bodies (who will form the electoral college) instead of the current method of being elected by the MPs. The problem of the current system is that President is always elected from the government party. This creates too much power for the governing party. Also, the current presidential post is too much powerless. The way they have designed the president post is exactly similar to the Queen/King post in other countries. But a King or Queen goes there by the birth right, so the system make sure that those posts are nothing but a relic to remind and honor the past. But in our system, the post of president is not selected by virtue of birth, rather some one is selected for that post since he or she has some capability. So we should be better empower this post.

(v) Local government bodies should be empowered. The current system of assigning funds to serve there local areas should not be encouraged. MP should stay in Dhaka, make policy that effects the whole nation. Also, he or she will be represented local areas when a local area specific things come to the national parliament. But there are rather rare occassion when a local issue comes to the national floor. MP should not go to mingle in the local development, unless he or she goes to the local government bodies out of personal interest. Local bodies should be empowered. There should be more elected position including a law enforcement position (similar to Marshal). Also, police forces, engineering departments, etc should become local bodies. The ministry which is called LGED is a joke. It should be fragmented into many many local bodies. But this can not be done in a day. A pressure group which make sure that this happens in stages will be very useful for the nation.

(vi) A proportional system of national election should be adopted, many agrees. This could be a very important pressure group or issue along with other issues. Currently, it is possible that a political party can be second in all 300 seats of parliament but end up having "no representation" in the parliament. This is a tricky issue. But the current system has an inherent injustice and inefficiency. There are many countries around the world, mainly in Europe, who has worked around this injustice. We could work on this issue. If this can be done, the things like "Jalil's treaty with Shaikhul Hadis" will be gone. This will reduce opportunism in politics - in general.


(vii) There is a crying need to have an additional TV channel which is free from corporate business interest. One NRB group could be formed to build such a TV channel with public support. This channel may work on the social business model - no profit no loss. If there is profit, that will be invested into the company. This channel can have two supplimentary channels - a TV guide and another something similar to C-SPAN in the USA. So, what we are saying is that to create an electronic media company that will bundle TV-Guide channel, PBS channel, C-SPAN channel together with other news outlets - but that would run on a no-profit no-loss model using Yunus' social business model.

Here we mention seven issues. You do not have to agree with all the issues. If you agree on one issue, work on that one. There could be one or more pressure groups who would work to achieve one or more of the above list. This should cross party line. Any politicians who agrees with these issues and promises to work on it, should be supported on an individual basis. If you can contribute, do that. Or you know somebody who may contribute in any of these two issues, please forward this article to them.

Thanks for your time,
Innovation Line

We have not seen the Liberation War, but we know if we can free the
country from corruption first, we will eventually get to other
dreams soon. Because of corruption, we could not even get into
information highway for years, let alone other dreams!