From the recommendation of my friend Ashfaq, I finished listening to the short story collection Exhalation by Ted Chiang yesterday. Ted Chiang has won four Nebula awards, four Hugo awards, the John W. Campbell Award for Best New Writer, and four Locus awards. His short story, Story of Your Life, was the basis of the film Arrival (2016). In the 9 short stories and novelette of Exhalation, Ted Chiang brings out a fusion of science, technology, religion, philosophy, ethics, morality, relationship, fantasy with great mastery. He takes an idea and gives it a very human touch instead of just focusing on the core technical idea, exactly the type I like. After Cixin Liu's Three-Body Problem trilogy that I finished 3 years back, Exhalation is the book that is going to instill FOMO (fear of missing out) in me for the new breed of sci-fi books (I still can't come out of Asimov). 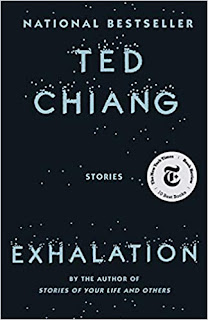 The stories in this collection are listed below. The first two are particularly better than the rest of the stories. The first one, The Merchant and the Alchemist's Gate, I would rate as one of the best short stories (in all categories, not just sci-fi) I have read in recent times.
at July 19, 2020 No comments: