No Rules Rules by Reed Hastings and Erin Meyer

Finished reading the newly published No Rules Rules: Netflix and the Culture of Reinvention by Netflix Co-founder Reed Hastings and Professor Erin Meyer (the author of The Culture Map) yesterday. I pre-ordered this book last month in anticipation and started listening as soon as it was available in Audible. This book narrates a fascinating view of the Silicon Valley giant Netflix's radical corporate psychology and culture. I got my share of shocks when I first read Netflix Culture Deck a few years ago for the first time, the document that was claimed by Facebook COO Sheryl Sandberg as probably the most important document ever to come out of Silicon Valley. Before being hired by an ex-Netflix leader at Marqeta (Manish Pandit), I worked at Roku for one and half years which was a spin-off from Netflix. There a big chunk of my team-mates I worked day-to-day were from Netflix including my hiring managers (Ken Chu, Shobana Radhakrishnan). Hence Roku not only shared the same building with Netflix but the culture and principles to some extent. For example, Reed Hastings touch-based on a story in this book where an employee got an offered lot more than what he/she asked. But in reality, this happened to me while I joined Roku. So I know that each of the stories told is not only real but very frequent or common practice as a matter of fact. 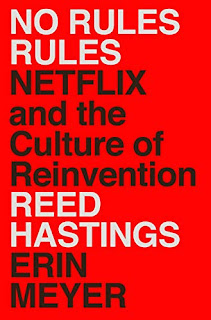 A few months earlier I read Netflix's other Co-founder and first CEO Marc Randolph's That Will Never Work. That was more about insights of the initial formation of Netflix as a viable business, which was amazing on its own. But in No Rules Rules, Hastings tries to share the unfolding of some of the most controversial and bold moves on how Netflix makes decisions on how to hire, build, compete, fire,  and expand. Unless we know how successful Netflix as a business is, most of these counterintuitive rules would be frowned upon (and even now it does) by any reasonable person. As of now, Netflix is worth 220 Billion USD market cap, with 8600 employees serving 193 million paid users (including 73 million in USA)  in 190 countries. Let it sink in first, before you think what do they know.

In this book Hastings talks about Netflix's culture of Freedom and Responsibility. The idea is to optimize for innovations via risk-taking instead of error prevention.

Here are some of the highlights in Netflix's journey.

Email ThisBlogThis!Share to TwitterShare to FacebookShare to Pinterest
Labels: 2020, professional

Like many of you, I am looking forward to a better 2021. So happy new year! But I want to also acknowledge that 2020 brought some good things to me despite the Corona Pandemic across the world. While we are safe, many of our friends and relatives lost their near and dears during this pandemic. We are still in lockdown and counting days to get over this pandemic in the new year.

I, along with my wife, son and daughter came back from 3 weeks of Bangladesh trip in the first week of January 2020. I am glad we could go for the trip in as the Coronavirus pandemic and eventual lockdown started within a few weeks of our return from Bangladesh. It was so refreshing to see my parents, brothers and their families, and my in-laws along with my school/college/university/chess friends back home. 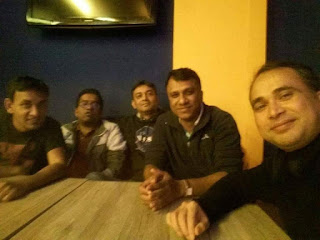 I successfully hosted an engineering meetup at Marqeta that many bay area engineers attended; it was a lively tech talk from Roko Ruze on Cockroach DB at our Oakland office.

Shusmita and I got our US citizenship in February. This enabled us eventually to vote for Joe Biden and Kamala Harris in November's US Presidential election.

Apart from the coronavirus for which year 2020 will ever be remembered in human history, the other bad thing that happened was George Floyd. I have been personally in pain for weeks, particularly as I have many good friends from Atlanta with whom I used to play chess when I first came to the USA, and many colleagues at our Oakland office - I could relate to their pain. 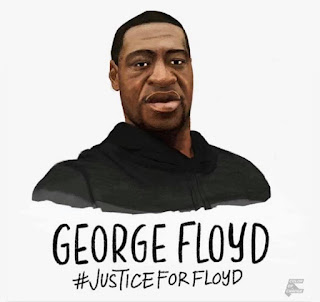 Professionally I made very good progress in my career growing a few engineers team into multiple teams. Marqeta raised further funding and became one of the most attractive pre-IPO companies to work for in the Bay Area. I saw my team expanding and several of the engineers and managers grow, some successful project completions that I was responsible for. I have been expanding my network as well via LinkedIn and a new AI-driven professional networking site LunchClub where I met some very interesting people across the globe.
I also attended a 6-week live program this summer on software startup formation with Shawn Kung, Venture Partner at AV8 Ventures, a VC firm based in Silicon Valley. He’s also an angel investor at Y Combinator Demo Day as well as a Stanford Lecturer. I partnered with 2 of the 45 participants and pitched the idea of Social Homes to the group. 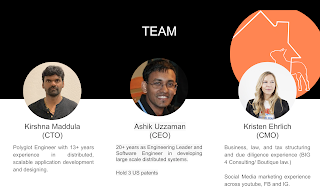 I gave a talk on the role of issuer processors in the payments ecosystem at JUGBD Virtual Conference in June. It was nice to catch up with
Mojahedul Hoque Abul Hasanat
,
A N M Bazlur Rahman
,
Mozammel Haque
,
Sazzadur Rahaman
, and
Oronno Abdullah Al Mamun
in the panel discussion.
My chess took a back seat this year as I focused more on reading and reviewing books. Despite that I drew with GM Enamul Hossain in Philadelphia Open, defeated WGM Carla Heredia in TNM, gave simultaneous chess in Marqeta Talent Show and thoroughly enjoyed Queens Gambit - both the Netflix series and the book.
Amongst friends, I spent lot of times with
Waliul Islam
,
Sumit Rahman
,
Suman Hossain
and their families. I exchanged countless ideas with
Nody Rashid
,
Rijwane Islam
,
Russell Syed
. Thank you!
But the best of this year for me was the fact that I finished at least a book every week (sometimes 2 or 3 books) all throughout the year. My Goodreads challenge for the year was to read 60 books, but I ended up finishing 70. My audible subscription helped me a lot as I find it faster to listen to audiobooks than reading the paper copy or kindle books. While I read various topics including philosophy, outer space, history, religion, biography, fiction, technology, science fiction - my major focus this was was leadership and management science. I not only read but researched the authors and wrote down the key takeaways from those books in www.dragon-bishop.com, my book review site. I have also been using podcasts, Udemy courses to learn on different topics. So I am very happy with my progress in gathering knowledge and sharing with my small networks many of these. I look forward to continuing this. 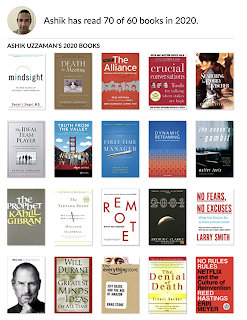 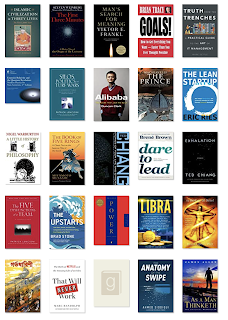 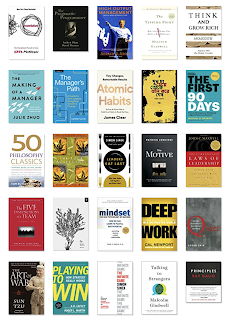