Thanks to current BABA EC and BOT committee, BABA 2014 election was held at Santa Clara on Dec 15, 2013 in presence of community members.  The election was held for 2014 BABA EC Panel of President, Vice President and General Secretary, as well as two vacant BABA BOT (Board of Trustees) positions.

I just paid off my Honda Accord 2009 LX. Hurray! Now time to start looking for Honda Pilot as we need a bigger car.
at December 24, 2013 No comments: Links to this post

I Became Runner Up in Tuesday Night Marathon, Fall 2013 at Mechanics Institute of Chess, San Francisco

In the 9th and final round of tuesday night marathon, fall 2013 I won against Oleg Shakhnazarov (USCF rating 2187) who was solely leading the board with 7 out of 8.


Natalya won a seemingly lost middle game against Brendan La Counte and hence thanks to my victory against Oleg, became champion with 7.5 points out 9. Oleg and I are runners up with 7 out of 9. In 3rd board IM Eliott Winslow defeated Ivanov and hence he is one of the several in joint 4th position with 6.5 out of 9.

I have been playing tuesday night marathon for more than a year now in Mechanics Chess Institute, San Francisco which just walking distance from my office. I never could be part of top 10 earlier. And now this time runners up! I am very happy with my performance although I believe I was very lucky last 3 rounds. For example, in this final round Oleg started a wild aggressive attack in the king side, being black and all his pieces undeveloped which was the result of a poor unorthodox opening. So as I defended coolly, he didn't have much chance the entire game except at the very end when I made a mistake and lost a piece that I was up, giving him practical drawing chances. However, due to time pressure, he couldn't afford the calculations needed and simply went to a same color bihsop end game to win back the piece he was down. That end game was a dead win for me and so I had no difficulty to win both by position and time. But last week in 8th round Russell Wong (USCF rating 2200) had a winning position being exchange up against me. However, he couldn't find the correct defence for the counter attack I got as a compensation, and hence he lost. In the seventh round Alex Steger (USCF rating 2041) gave me the break by blundering a piece in an equal position. Being a FIDE rated event, I believe now my FIDE rating will also increase. My USCF rating before this tournament was 1882 and after this is going to be 1990, a hoping 108 points added! The final standings can be found here.

IM John Donaldson mentioned me in the 652nd newsletter of Mechanics Chess Institute while reporting on the final round - http://chessclub.org/news.php?n=652 . From this newsletter I came to know I have won $250 also from this tournament!

Now looking forward to the North American Open next week in Las Vegas where my son will also play along with a few other Bangladeshi chess players one of whom are coming from Dhaka.

Email ThisBlogThis!Share to TwitterShare to FacebookShare to Pinterest
Labels: chess

I played well and became 3rd in the U2000 section getting $200 in the process as prize money. With this my post event tournament rating jumped from 1870 to 1924. Here is the final standings of all the sections and you have to scroll down a bit to find section A (1800-1999) result. In the open section IM Ricardo De Guzman won the trophy.

I didn't notice earlier but I see now that I have a FIDE rating of 1739 since last August 2013. So my next target will be to increase the rating and cross the 2000 barrier.

Here are my 6 games that I played in this Labor Day Weekend Tournament.

Isaac Asimov on his failure at Chess

I am reading Isaac Asimov's autobiography I.Asimov: A Memoir with immense interest. In the first quarter of the book, I came into a short chapter called Chess. I can't resist myself but share it with you here - 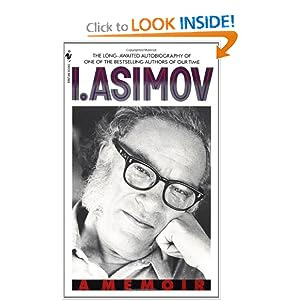 Failure at physical sports has never bothered me...What bothered me, though, was my failure at chess. When I was quite young and had a checkerboard, but no chess pieces, I read books on the game and learned the various moves. I then cut out cardboard squares on which I drew the symbols for the various pieces, and tried to play games with myself. Eventually I managed to persuade my father to get me real chessmen. Then I taught my sister the moves and played the game with her. Both of us played very clumsily indeed.

My brother, Stanley, who watched us play, learned the moves and, eventually, asked if he might play. Ever the indulgent older brother, I said, "Sure," and prepared to beat the pants off him. The trouble was that in the first game he ever played he beat me.

In the years that followed, I discovered that everyone beat me, regardless of race, color, or religion. I was simply the most appallingly bad chess player who ever lived, and, as time went on, I just stopped playing chess.

My failure at chess was really distressing. It seemed completely at odds with my "smartness," but I now know (or at least have been told) that great chess players achieve thier results by years and years of studying chess games, by the memorization of large numbers of complex "combinations." They don't see chess as a succession of moves but as a pattern. I know what that means, for I see an essay or a story as a pattern.

That's not enough, however. I never thought of comparing myself to grand masters of chess. What bothered me was my inability to beat anyone! The conclusion that I finally came to (right or wrong) was that I was unwilling to study the chessboard and weigh the consequences of each possible move I might make. Even people who couldn't see complex patterns might at least penetrate two or three moves ahead, but not I. I moved entirely on impulse, if not at random, and could not make myself do anything else. That meant I would almost certainly lose.

And again - why? To me, it seems obvious. I was spoiled by my ability to understand instantly, my ability to recall instantly. I expected to see things at once and I refused to accept a situation in which that was not possible.

Another wins another Quad in CalNorth Youth Chess

Ahyan won another Quad in Weibel School arranged by CalNorth Youth Chess. He was in Quad#23 scoring 2 wins and a draw. As a reulst he got his third trophy.

I was giving live commentary on top board of Quad#1.

Here are Ahyan's first and third games. The second game was a draw by repetition. 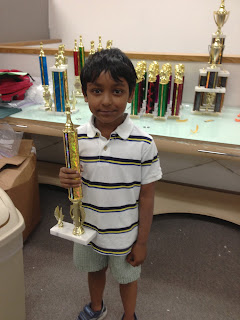 Today Ahyan won his first championship trophy in his life. He won all the 3 games in the Bay Area Chess Quad in his group that was held in Milpitas, CA at 20th April 2013. His opponents were rated 509, 414 and 715 respectively. Here is the first game that he wrote the chess notation while playing, so I could capture after the game.