We had a quick Portland trip during the labor day weekend of May. I had lot of works pending in office and hence I didn't want to take extra day offs for the trip. Also Amin would have been able to join us only if he wouldn't have to take any leave. Considering all these I decided to fly to save time as well as not put much pressures on Shusmita at a time when she came just came out of first trimester. I purchased air tickets from priceline by a bid as tickets were sky priced at the very last moments for this long weekends. I took Holiday Inn through my citibank thank you points. Amin joined us shortly. Shahriar, sachi and safwan drove to Portland at the same time in Saturday so that we could join the train ride together Sunday.
Wali Bhai dropped us to san francisco airport Saturday afternoon and n we reached Portland airport, we found Shahriar there outside the airport. I took a toyota camry from airport and then had dinner together with sharij restaurant.

The next morning we went for breakfast in Shahriar's hotel cafe. From there we drove around 50 miles to the Parkdale Excursion Train Ride. The train for Mt Hood started at 10 AM. After one and half hour journey through hood river and other places we reached 6 miles away from Mount Hood. The mount was covered by ice in the few thousand feet. We could see the icy peak from train but I was disappointed as I thought the train will go up to the base of the mount.

While returning back to downtown we drove to Multnomah falls, the tallest fall in Oregon. I liked it so much. It was the best fall i have seen apart from Niagara falls. I went upto the bridge which is in the middle of the two parts of the falls.

We had our early dinner at an Indonesian restaurant in downtown named Entice. I liked there food so much because those taste like Bangladeshi food to some extent.
We spent the whole evening in Powell Book Store in Portland downtown which is claimed as world's largest used and new books store. It's like a city of books not a single shop!
We returned back at sunday early morning flight. I attended a lunch invitation in Sunny's house where Mushtaq came with his famiily. He is still skinny and has grown a beard a little but very easily identifiable as he hasn't changed much.
Nitol arranged his reception in chandni. It was fun. We had to go late as Shusmita and Nodee had to prepare Shoma with her dress before they themselves got ready. 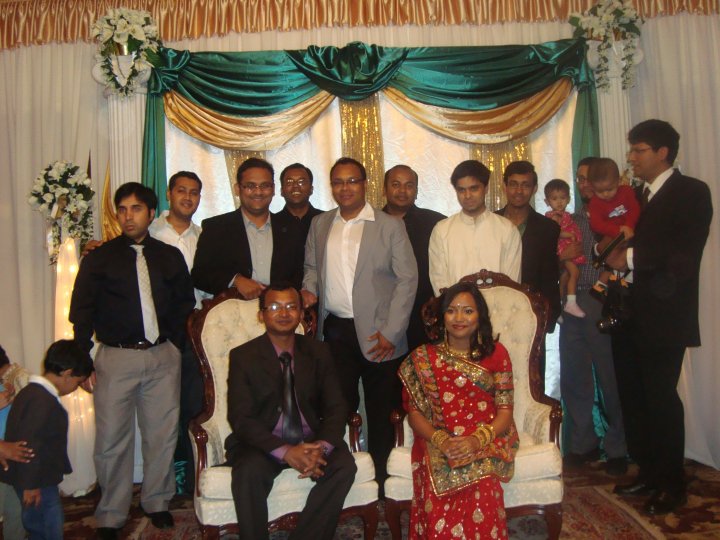 FIFA world cup football 2010 in South Africa started. So far I have been following Brazil's games madly.
We went to De Young Museum & Stinson beach couple of weeks back. Amin joined with us and we enjoyed it a lot. As usual, we ended up going to Nick's Lighthouse in San Francisco for crab cake at dinner on the way back.
In the meantime, I saw Raavan (alone in Big Cinemas of Fremont), Toy Story 3 (with family and colleagues in Loews Imax Theatre in SFO), Knight & Day (In Union City we 5 guys) in movie theatre. In office, I have passed another successful release 166.store and during the deployment night of 19th June, Shusmita and Ahyan stayed in Hyatt hotel with me. We roamed around San Francisco taking the cable car, or simply walking in the farmers market in Ferry Building the next day. Among the books I finished Robo Nishi by Zafar Iqbal, Bipod & Onish by Humayun Ahmed, Nemesis by Agatha Christie and I will teach you to be reach by Ramit Shethi.
Shusmita picked her new iPhone 4G. I don't think the shape of this is as good as 3G but there are 2 cameras and the 5 mega pixel proves it clearly better device for photo taking than the earlier versions.
Last night we arranged a surprise baby shower for Shoma at our house. It was fun.
at June 29, 2010 2 comments:

Last weekend I saw Raavan in Big Cinema of Fremont just to see the songs of AR Rahman. I am highly impressed again by him with his musical magic touched by the devinely lyrics of Gulzar. After Jai Ho, this is another class from AR Rahman and Gulzar combination. This time it's Behne de mujhe behnde song. And what a lyricist Gulzar is! Due to this song I have become a fan of Gulzar now. And to mention anything about AR Rahman would be simply repeating myself again and again.

Day and night I am listening to this song now in my iPad or in office PC. Here are starting parts the lyrics from that song if you know hindi a bit.