Avatar The Movie: I Think It Will Cross Billion Dollar Revenue Worldwide

Last weekend I saw James Cameron's sci-fi movie Avatar with my friends and family at San Jose 3D Imax Theater. It was fantastic enough to go beyond my expectation! Even before the movie was released, I read about it online to know that James Cameron wrote the initial script for this movie at 1994 (15 years back) but only could release now because he was not satisfied with the then-technology to support his imaginations to bring into the film properly. He in fact invented a Fusion Camera System so that he can capture 95% of an actor's facial expression to it's computer character counterpart. James Cameron already is very selective in movie direction (only 5 so far) and made the highest revenue generating movie of all time Titanic (1.86 billion USD). I was in the opinion that Avatar will cross 1 billion dollar revenue; it's official production cost is $237 million (excluding approx. $150 million marketing cost). Let's see if it crosses my expectation in terms of revenue as well. In fact I see a very potential for it to cross even Titanic's revenue and touch 2 billion revenue worldwide for the first time in box office record history.

I liked the story, the acting, the camera work, special effects, sound everything. I specially liked how the director slowly took all the audience to Pandora's side and how the the hero Jake slowly adapted himself in Pandora and proved himself as a great warrior. Ahyan was first half an hour very scared of the sound and idn't use the 3D glass. But later he got comfortable and watched the movie. Shusmita, Amin, Hasinur. Prakash all were of the opinion that it was a good movie. The question is how good it was - just good, very good or excellent? Well for me it's simply outstanding and unimaginable! You have to see it in 3D IMAX, otherwise you will miss half of the movie's charm. It's the best cinematic experience that you can ever have and surpasses what we saw in 2012 a few weeks ago.
I had a few winter parties last few days. First it was in Nitol's party at San Jose Tech Museum. Then we went to Ahyan's school's winter party. And at last the Salesforce holiday party at Concourse Exhibition Center, San Francisco.

Update 1: I see Avatar has already earned $287 million dollar worldwide in opening weekend! Looks like my predictions are getting closer to realization. Let's see.
Update 2: As of today,Avatar cross 726 million US dollar in worldwide gross revenue! Looks like my prediction of crossing 1 billion dollar (even before it released) is going to be correct!! Check - http://en.wikipedia.org/wiki/Avatar_(2009_film)

Update 3: Here you go from wikipedia on Avatar crossing the billion dollar mark as per my prediction - After 17 days of being released, Avatar has come to gross $352,111,000 in the United States and Canada and $666,700,000 in other territories with a worldwide total of $1,018,811,000, making it the fastest film to hit the $1 billion mark.This now makes the film the fourth highest grossing of all time unadjusted for inflation.
Update 4: Last might I saw it second tome in Regal Dublin 3D IMAX with Sumit Bhai, Shahriar. And by now it crossed 1.6 billion dollar gross earnings worldwide. Here is the link for James Cameron's original script of Avatar that he wrote in 1994.
Update 5: After 45 days of domestic release, Avatar has grossed over $594 million, and $1.444 billion in other territories after 47 days of international release, for a worldwide total of $2,039,222,000 .On January 25, 2010, after only 41 days after its initial release, it surpassed Titanic's worldwide gross to become the highest-grossing film of all time worldwide.On January 31, 2010, it became the first film to earn over $2 billion.

Peahen At Our House

A week earlier when I was working at office before lunch, I got an email from Shusmita with a picture of a peacock. She was telling that this peacock is walking around in our patio.I was so surprised and then at night when I reached home, I saw this big bird there resting in the railing beside the entrance of our door. It's beautiful and amazing. Ahyan was jumping up and down to show it to me. Shusmita later told me that it's a peahen and not a peacock. Ahyan already named it Peacock Zaman (as his name is Ahyan Zaman). 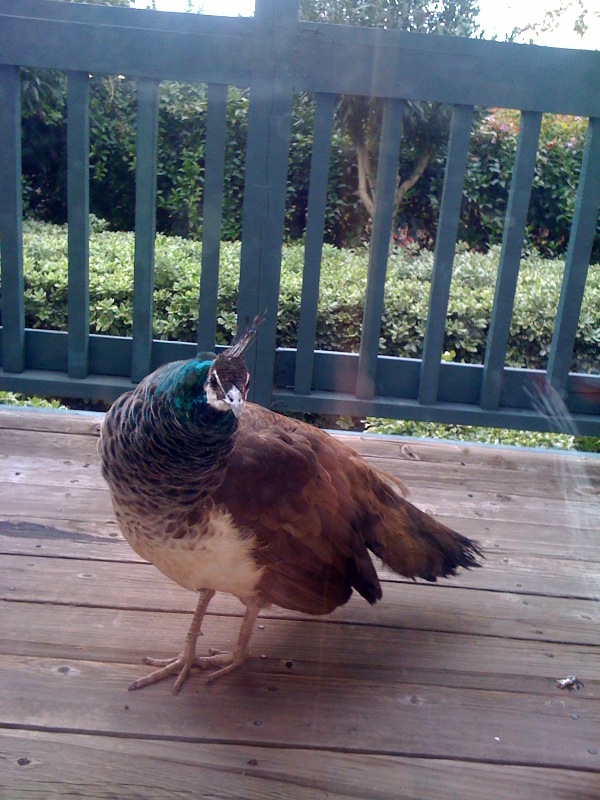 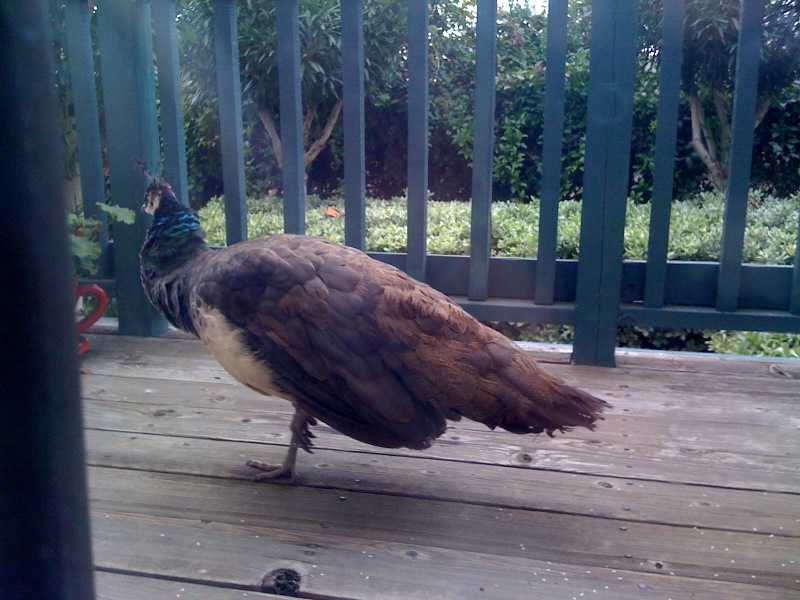 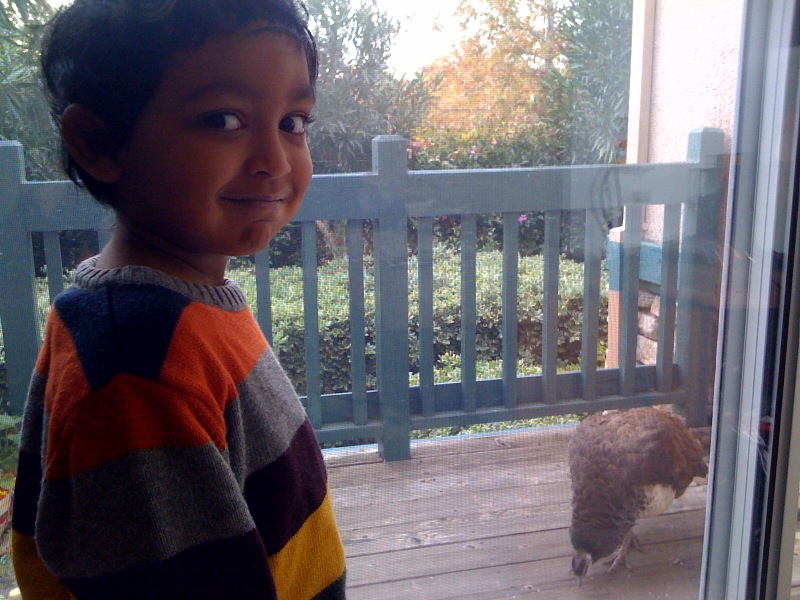 Shusmita called the Fremont Wild Animal Association and they seemed not bothered at all. They told that if the bird is not injured, they are not coming to pick it. The first day we gave her only rice. But the very next day, Shusmita did some googling and purchased wild animal food from Petco including dogfood and lettus. The peahen seems very happy and is with us since then. My freinds and colleagues came to see it and people are excited to see this beautiful bird just within a feet of distance. As our living room and patio is only separated by a glass door which can be opened if necessary, we always see it walking around, eating or sleeping.

Nitol went to Bangladesh to get married and hence we threw 2 parties at our house with 2 different circles to celebrate it.
at December 16, 2009 1 comment:

After almost five months we went for a travel out of town during this eid ul adha / thanksgiving vacation last week. Wednesday night Amin called me and we met at Peacock for tea. We instantly decided to start for LA the next morning just a day before the eid day. I think this kind of sudden plans are fun even if a bit expensive. We had to do the hotel booking at that time and buy the tickets of Universal studio and Disneyland.

Next morning we left Fremont at around 11 AM and reached Airtel Plaza hotel at Van Nuys (in 5 and half hours of drive), just 15 miles before LA downtown. After taking some rest, we went to Aladin Sweets for dinner. We ordered almost all dishes at once and couldn't finish most of it.

The next morning we went to Universal studio around 10 AM. Amin and I enjoyed the rides very much, specially Mymmy ride and Jurasic Park. The studio tour, waterworld and Terminator is always my favorite but I didn't like much Shrek 4D. The front line pass helped us bypass the holiday crowd and at the end of the day we bought the annual pass as we definitely plan to come here a few times next year.

Saturday we went to Disneyland at Anaheim after having breakfast at hotel.Well, the first half till lunch the only people who seem to have enjoyed were Ahyan and Shusmita.However, after lunch the situation changed very well when we saw the parade and started the rides one after another. Finding Nemo, Star Spaceship tour, Slider, Jungle Cruise, Pirates of the Caribbean, Indiana Jones, Small Worlds. We finished the visit to Disneyland after watching the beautiful fireworks at 9:25 PM for 15 minutes or so. We didn't even get time to go to the Disneyland Adventure park. We went to Noel and Afroze's house from there which is within 10 miles of Disneyland. After having dinner and adda till late night (2 AM) we came back to hotel.

We were sorry to know about Sayeem and Shornno's car accident while returning from the eid prayer. In highway, a car skid due to rain that morning and dashed Sayeem's car. Both the car as a result hit the divider. However, they are all okay now after getting released from the hospital emergency. Sayeem's car is declared as a total loss and I know what a pain it will be for him to run around the insurance and medical staffs as I have gone through this recently.


Next morning, we went back again to Noel's house for breakfast. We went to Little Dhaka from there for some Bangladeshi food. But we didn't get the soups we were looking for and hence again went to Aladin. By the time we finished all shopping in Aladin and started back for Fremont it was 2:30 PM. Due to the heavy holiday traffic, we reached Wali Bhai's house (for dinner) at Fremont after 9 hours of drive. Last 150 miles in the night, almost 3 hours, Amin drove the car as I was feeling a bit tired driving since morning.

It was a good vacation on an instant notice and I loved driving my new Accord in its first long drive which crossed 6500 miles by the end of this trip.